Reading is our doorway to knowledge, places and cultures. The most valuable thing a book offers is the encouragement for a child to imagine.

ANG PAGLIKHA NI KABUNIAN SA MGA TAO (How Kabunian Created People) by Rafaelita Valera tells of how Kabunian, god of the Ifugao people, created the first people of three distinct colors. It was said that with mud, Kabunian began to create until nightfall. And as the dark, mysterious color of night enveloped the clay on Kabunian’s palms, the first of the dark-skinned people came into being. It was only the beginning, for the following day, Kabunian eagerly continued his work. At Mt. Pulog (or Pulag), mud was again rolled and shaped, bringing to life the forefathers of the first people. 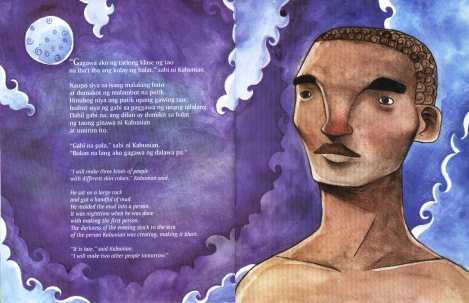 How Kabunian Created People is among the myths re-told
by Rafaelita Valera in Noong Unang Panahon, a children’s storybook with
colorful illustrations by Ghani Madueno whose works were then turned into animated storyboards for the Ollybolly Online Picture Book by the Daum Foundation. 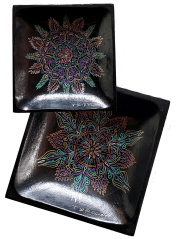 Except where otherwise noted: This blog is © 2016 BrownPot under a Creative Commons Attribution-NonCommercial-NoDerivatives 4.0 International License.
Follow BrownPot on WordPress.com

Any trade names and product names of companies, organizations or groups appearing on BrownPot and seen in related articles, posts, documents and any other material are all trademarks or registered trademarks of those respective entities.
%d bloggers like this: